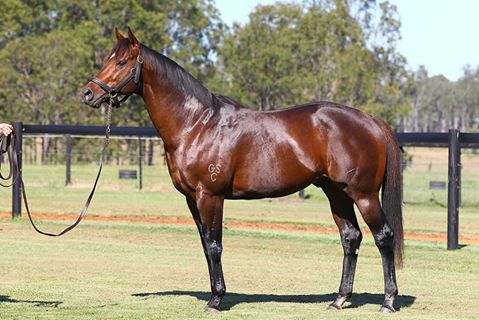 Peter and Leah Smith are proud to announce the relocation to Victoria of exciting stallion Swift Alliance.

An outstanding sprinter held in the highest regard by trainer Gai Waterhouse, the handsome bay has stood the last few seasons in New South Wales serving just small books.

When discovering that the horse was on the market, Peter Smith jumped at the opportunity to stand the member of the hardy Sir Tristram line – noting that Swift Alliance is a horse who ticks every box for the owner/breeder.

“I really think that front running speed horses make good stallions,” Smith said – noting that current leading stallion Snitzel was one such galloper – “and Swift Alliance had plenty of pace and a great turn of foot.”

“Not many horses win five stakes races and he did it over three seasons, proving his class, toughness and durability.”

“And he retired sound, something those who breed to race are going to appreciate.”

Right in the market on the back of strong trial form at his Canterbury debut in October 2008, Swift Alliance put on display his terrific natural dash, proving a class above his rivals with an exciting 5 1/4 length victory.

“He is a very professional race horse,” reported jockey Daniel Ganderton. “I had to shake him up a bit from the wide gate but he came back to me and when I asked him to extend the more I asked the more he gave.”

Odds-on at his next start at Rosehill, Swift Alliance was just as fast and just as impressive – and his good form continued in his second preparation which saw him win four of five.

Rapidly progressing through the grades, Swift Alliance won 1200m contests at Randwick and Rosehill enroute to a two length victory in the Listed Show County Quality.

“He really exploded when I wanted him to,” said jockey Blake Shinn – “he quickened like a really good horse.”

“He is a horse on the improve,” said Gai Waterhouse, “he has so much brilliant speed and digs so deep. He is very exciting, I love being involved with him.” 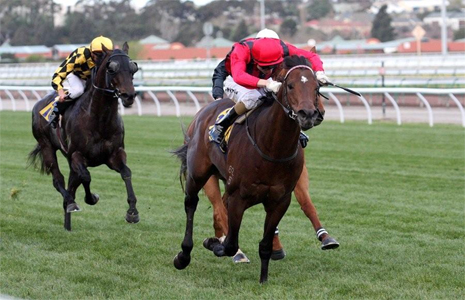 From there he made his first trip to Melbourne, taking out the Gr.3 Bobbie Lewis Quality down the famous Flemington straight.

Again Waterhouse was enthusiastic – “he is such a terrific racehorse. I thought he was going to run a nice fifth but then he just went whoosh and accelerated like the very good galloper he is.”

Swift Alliance enhanced his form the following autumn with another Gr.3 victory (the Star Kingdom Stakes) before a close and gutsy second in the Gr.1 Galaxy.

“He set off after a nice tempo and quickened very well,” Nash Rawiller reported, “and with 60kg today it was a great effort.”

“He is just a real bonny sort of horse and one of the favourites at the stable. All he tries to do is please.”

“He really towed me through the run with the big weight and once he got his run he wasn’t going to get run down,” Rawiller said.

“This horse has a heart as big as himself. He is a little champion in his own right, he never lets you down.”

Retiring to stud having performed consistently at high level over three seasons, Swift Alliance won nine of his 19 starts, amassing in excess of $628,000 in stakes.

The particuarly handsome Swift Alliance is one of ten stakes winners sired by the underrated Don Eduardo who was considered by many great judges – such as George Smith, Sir Patrick Hogan and Gai Waterhouse – to be the best yearling ever to go through a southern hemisphere sale.

Little wonder then that he attracted a then record-breaking bid of $3.6 million at the 2000 Karaka Premier, Gooree the winners with Gai Waterhouse the under bidder.

Like his son Don Eduardo was a horse who knew how to find the line, during the summer and autumn of 2002 stringing together four impressive victories – each time rising in class.

From a 3 1/4 maiden length victory to a six length Class One win to an easy Listed win at Caulfield to Group Three success in the Shannon (now Autumn) Classic.

And two starts later, after a gallant Rosehill Guineas second to Carnegie Express, an exciting victory in the AJC Derby. And he went on to prove himself at weight-for-age, finishing third in the Underwood Stakes and the Australian Cup both won by the champion Northerly.

Faring well at stud in New Zealand before his recent return to Gooree Stud, Don Eduardo has been represented by ten stakes winners including the dual Group One winner Booming and the Group winners Divine Rebel, Mungo Jerry, Vickezzchardonnay, Don Domingo and All In Black.

Described by Peter Smith as a “really beautiful horse with an outstanding temperament,” Swift Alliance makes his Victorian debut at a fee of $3300 (incl gst).